Lincoln Badminton Club was formed early in the glorious 1970’s, when men wore tight shorts and drank beer out of very large bottles.

Forty years later the shorts are baggy,  bottles are smaller, and Lincoln Badminton Club plays on!

Our season starts on the first Wednesday in March and we play every Wednesday night until mid September arrives and we start getting tired.

We play at the Lincoln Events Centre: Google Maps

We run two junior sessions to cater for different age groups and abilities:

Beginner Juniors:
6.00pm – 7.00pm
This session is for younger players (primary school age) who are relatively new to badminton.  Our focus with these players is getting the basics right and enjoyment of the game.  Coaching correct racquet grip and basic production are broken up with fun games and activities.

and a senior session for the oldies…

Seniors:
8.00pm – 10.00pm
Our final session is open to adults of all abilities.  We play a series of fun doubles matches with the emphasis on enjoyment.  Games throughout the evening are tailored so that players will play in a variety of games, some with less experienced players, and some with players of similar or higher ability.  At the end of the night we hope everyone will have played some competitive games and have had a chance to learn from or teach other club members. 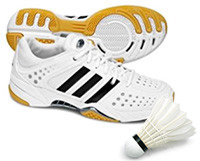